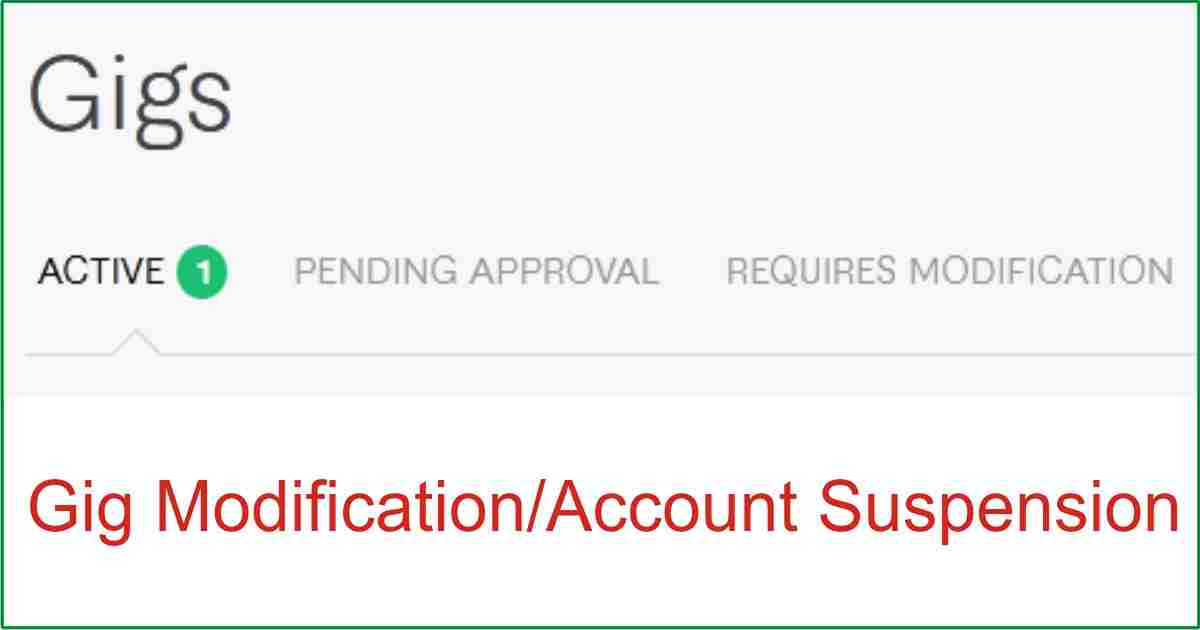 It often happens when fiverr sends notification to the sellers that their gigs requires modification and it is usually because of some policy violation.

Generally sellers modify the gig and send it to fiverr for further review. But it results in removing the gig by fiverr and leaving a warning.

So the best way is the seller should remove that gig and save his account from the warning. My personal experience suggests that even if you change the title, description, image and everything, even then fiverr doesn’t accept that modification and leaves warning.

Two similar warnings may result into suspension of the fiverr account. If warnings are on different kinds of gigs, there are three chances instead of two.

What should be done to avoid Fiverr Modification Warning?

First, sellers should read fiverr terms and conditions and avoid things which fiverr has warned. If you still are not sure what to avoid, create only one gig about each type of service.

If that service comes under violation, you ll have only one warning on your account and still you have chance to work on other services as your account will not be suspended for single warning.

If you create multiple gigs on same service and that comes under some policy violation, you ll receive multiple warnings and your account will be suspended immediately after warnings.

Which services are not allowed on fiverr?

Usually those services which violate other companies’ terms and conditions are not allowed to sell on fiverr.

For example, youtube policy reads that you cannot buy or sell subscribers and watchtime. If you create a gig on fiverr to provide subscribers, you are violating youtube TOS. Fiverr will have to remove your gig to avoid any legal action from youtube.

So fiverr sends modification notification to the seller which is actually a message to remove that illegal service.

Similarly if you create a gig to provide reviews, it will also get warning as you are providing fake reviews for some business. Whereas businesses need real and honest reviews made by the buyers.

What to do if fiverr suspends or flags your account?

If you receive two warnings from fiverr, they will flag your account which means you can complete your running orders and withdraw money on due dates.

If fiverr suspends your account, it means your running orders will be cancelled and you won’t be eligible to withdraw money for next 3 months. After 3 months fiverr will allow you to withdraw money and say good bye.

So after losing your fiverr account you become jobless immediately. Fiverr doesn’t allow you to create a new account as you are already destroyed your image before them. So what to do next?

You can create new fiverr account on the names of your brothers, sisters, parents or cousins. But remember, fiverr takes selfi to verify new sellers. Good luck and keep earning and learn from mistakes.